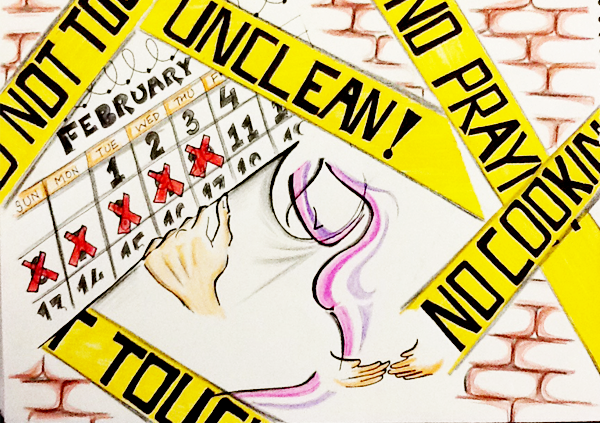 With periods come cramps, mood swings and heavy flow. However, another addition to these is a big list of bizarre superstitious beliefs about periods; especially for the Indian woman. Fortunately, the 21st-century Indian woman has defied these superstitions – with the help of women who came before her, of course.

On this #DefySuperstitionDay, let’s talk about a list of bizarre superstitious beliefs about our period that we have heard of –

1. A menstruating woman shouldn’t be touched

This age-old belief stems from the thought that women on their period are “impure” and “dirty”. This myth is not only discriminatory but also demeaning to all women. Women are perfectly clean during their periods as long as they practice hygiene. So ladies, menstruation is a normal bodily process and doesn’t equal uncleanliness!

2. You shouldn’t enter the kitchen on your period

Another superstition related to women on period is the myth that they shouldn’t enter the kitchen while on their period. This is due to the widely believed notion that a woman on her period will “spoil” the food or make it rot! This myth is completely false and in fact, women were asked to not enter the kitchen whilst on their menstruation cycle; because it was tedious and they were asked to rest instead. So, if you ladies enjoy cooking, cook away. You aren’t spoiling anything!

3. Any contact with a man can get a woman pregnant

If this one was true, the chaos to entail would be absurd! This ridiculous myth stems from the regressive thoughts of people back in the day about relationships between men and women, and also sex. It lays fear into women who don’t know any better, and further perpetuates the thought that sex is taboo. Just to make things clear about this bizarre period superstitions – the only “physical contact” that can get a woman pregnant is sexual intercourse.

4. Tampons shouldn’t be used by virgins

Another ridiculous myth stemming from viewing sex as taboo is the superstition that virgins shouldn’t use tampons. While virginity in itself is a social construct, the problem is the fear of “tearing” your hymen. Many people believe an intact hymen indicates a woman who hasn’t had sex, and that apparently wearing a tampon tears the hymen. This is false, and it needs to be known that a woman’s hymen can tear while doing several things. For example, any sports activity such as cycling or horse riding can also lead to this.

5. Women shouldn’t wash their hair while on their period

This one probably shocks you but it’s one that has stuck around for a while. Women on their period are constantly told not to wash their hair, with unsatisfactory reasons. The possible origin of this myth could be from the fact that back in the day, there were communal bathing areas and this would make it harder for women to bathe “discreetly”. In addition, the luxury of hot water wasn’t freely available back in the day and cold water is said to increase the intensity of cramps. This myth is perhaps one of the most bizarre period superstitions, and it’s definitely hard for us to not wash our hair for  5-7 days.

In addition to these ridiculous superstitions, there were a few unique and interesting ones that were debated on by the #NuaCommunity too. Here’s the truth about them:

Today, these superstitions aren’t as widely believed as they once were. However, they are perpetuated in many households even today.

On #DefySuperstitionDay, let’s dismantle these myths once and for all and live our life the way we want to.

Have you heard of any more period related superstitions? Share them with us in the comments below.

Children's Day celebrations never change, even after your period