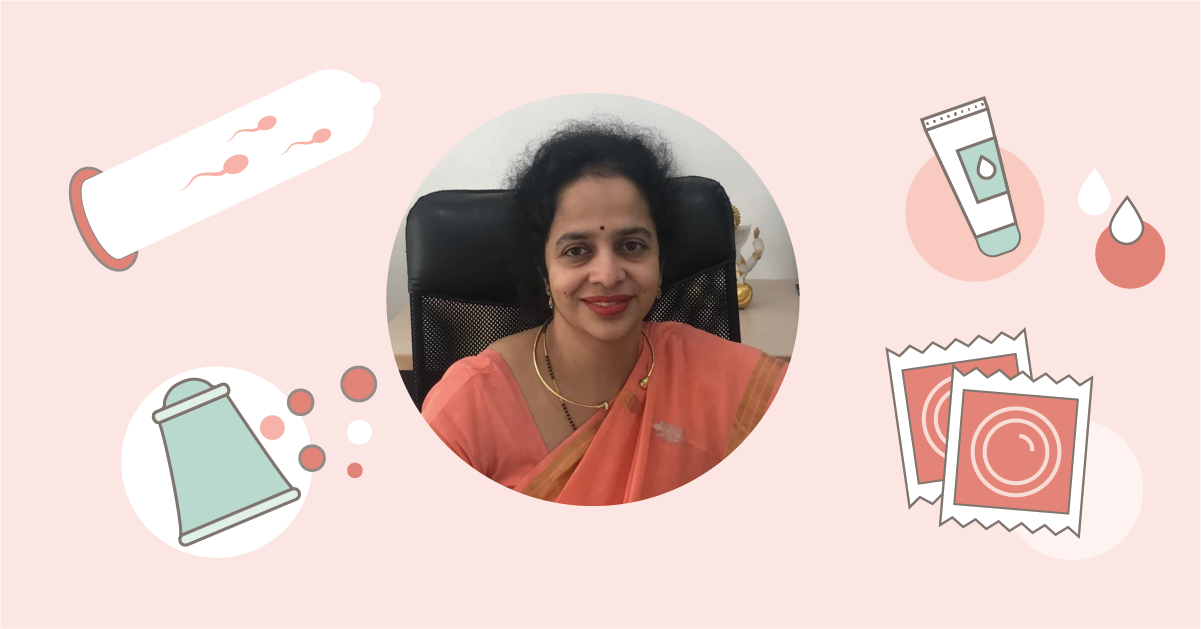 With growing importance being placed on safe sex practices, education around the usage of condoms is crucial. It is one of the barrier methods of reversible contraception which also protects from sexually transmitted infections.

Q1. What are condoms?

Condoms are usually a sheath or a rubber covering worn on the man’s penis or inserted into a woman’s vagina to prevent pregnancy during sexual intercourse. Male and female condoms provide a barrier to the ejaculate, pre-ejaculate, and cervicovaginal secretions. They are made of latex, polyurethane, lambskin, or nitrile varieties depending on the type of condom used.

Q2. Why are condoms important to use?

It can be used as an additional method either in the short term, for example, when starting hormonal contraception, or in the long term to provide double protection. They can also be used for STI and HIV prevention.

Q.5 Is lubrication required when using a condom?

Condoms come lubricated to make them easier to use. The use of lubricant to the inside of condoms or outside of the penis before using condoms is associated with an increased risk of slippage. Make sure that the condom stays in place while you’re having sex. If it comes off, stop and put on a new one.

Oil-based products (such as baby oil and petroleum jelly), commonly used vaginal antifungal creams can damage latex and may increase the risk of breakage of latex condoms and contraceptive failure.

Q.6 Who should be responsible for buying condoms?

The onus of safe sex and the prevention of unplanned pregnancies is equal for both partners in a relationship. Hence buying a condom and making it available, and accessible during sexual encounters should not be looked upon as a lack of morality or sexual libertine, but as a matured responsible behavior between both partners. Avoid using condoms lubricated with N-9 (nonoxynol-9).

It’s important to check condom packaging for the relevant safety markings and the ‘use by’ date. A condom past its expiry date is less effective and more likely to break. A new condom should be used for each episode of sexual intercourse or if applied incorrectly.

Q.8 Can one sized condom fit all?

It’s important to use a correct fit condom to avoid failures, slippage, protection and experiencing sexual pleasure. The sizes in condom brands commonly available vary from 80 – 240 mm in length and 41 – 69 mm in width. They are marketed as snug, regular and large fit depending on the average erect penile dimensions. which is between 5 – 7 inches long and 3.5 – 6 inches in circumference. As per ICMR, the available condoms in India are usually oversized.

Q.9 How to safely dispose of a used condom?

You should only take the condom off the penis or the vagina when there’s no further contact with your partner’s body and tie a knot at the open end. Throw it in a bin after wrapping it in a tissue. Never flush condoms down the toilet as they are non-biodegradable and can block toilets.

Our experts work round the clock to provide you with the answers that you are looking for. If you have any, leave it in the comment section below or send us a DM at @nuawoman. This is a safe space so don’t hold back on any doubts you may have about your body and mind. Read our other Community Asks here and learn more about how to maintain your sexual health here.

Read all of Dr Vaishali Joshi’s other articles here.

How practising self pleasure is important for your sex life

Are you expecting? Take care of your pregnancy diet ASAP