Celebrating Haldi Kumkum Ceremony as a woman of today

Celebrating Haldi Kumkum Ceremony as a woman of today

January comes and then women all around the country gear up to celebrate haldi kumkum, a ceremony which follows Makar Sankranti – the first festival to kick-start the year. It also happens to be the only Hindu festival based on the position of the sun (the others follow the moon). More importantly, it’s the only festival which falls more or less on the same date – 14th or 15th January, which matters a lot to the working woman of today; because if she’s lucky; she can count on one holiday. There is a chance that she’ll spend that holiday in preparing large quantities of sweets from sesame seeds and jaggery for friends and family to consume, but well, can’t have everything. This mostly applies to married women, so singletons can just enjoy the day off and munch on ’til-gul’. 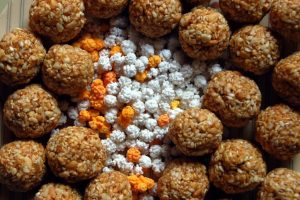 To celebrate this day, women also organise an event known as ‘haldi kumkum’, during which they invite other women over and apply turmeric (haldi) and vermilion (kumkum) to their foreheads, dab perfume (attar) on their forearms, sprinkle rose-water over them and offer them a sweet, a flower, a coconut and a small gift before sacrificing them (okay, just kidding about the last bit). This ceremony is for the well-being of the applier of the haldi kumkum and the ‘appliee’. Mostly popular in the western states of India, the period of Makar Sankranti is considered favourable for spiritual practice and any gift given during this period is equivalent to offering and receiving the grace of the Divine on both sides.

The ceremony is believed to have started in the reign of the Peshwas, when the ladies of the royal families would invite their married friends over and offer expensive gifts of saris and jewelry. While the men were away fighting battles for glory and power, the women of the house hardly ever got a chance to leave the house. The haldi kumkum ceremony gave them an opportunity to do what every woman loves – dress up, go out, meet other women and bond with them over choice delicacies (kairi panha and vatli dal in this case) and even come away with a little gift; which could be used either in the kitchen or for personal adornment. And they got to do this not once but several times over – depending on how many friends and relatives one could invite and be invited in their turn. The festivities begin from Sankranti and continue well into February, so this would have been a busy, happy period in the lives of many women then.

The women of today are known to get the entire ceremony catered, if the number of invitees is large enough. It is now a social outing, and provides yet another opportunity for ladies to dress up, go out, meet friends and exchange presents and can be added to the long list of festivals which are accused of becoming too ‘commercial’. There are now haldi kumkum planners who offer to manage the whole show – right from food, to entertainment and buying suitable gifts that would be tasteful and exclusive. It certainly offers a wide scope of areas for women entrepreneurs to explore, innovate and come up with an attractive package of services for the working woman/socialite/newly-wed who is looking to host a memorable haldi kumkum ceremony.

The spoiler here is that it is also restricted to married women. All the offerings given during this ceremony – vermilion, flowers, rice, coconut- symbolise matrimonial bliss. Young single girls are allowed, on the condition that they accompany a ‘suhaagan’. But the others – the widows, spinsters and divorcees (words which, by themselves have strong negative connotations) are given a wide berth. The status of a married woman is more elevated than one who is single – whether by choice or by fate. The women who deck themselves out in honour of this occasion will pray for the long lives of their husbands or for the deity to bless them with a good husband. Patriarchy – much?

Caught up as we are in the daily grind of routine life – the men may not go to battle but the daily commute can be bad enough and now the working women do it too – do we really need this tradition; in a calendar already loaded with several festivals; each with their own duration, rites and rituals?

I think we do. And the first, most important reason to celebrate it is that the rituals of the haldi kumkum festivals are woman-centric. All that’s needed is to make it more inclusive, so that it is no longer the domain or privilege of married women.

Another reason would be, as mentioned earlier, that it’s an excellent business opportunity for enterprising women. There are things that only women know, for example: the answer to the question – what do women want? But seriously, who better than a woman to entrust with the task of picking out presents for other women, fixing a menu and decorating the house?

And finally, traditions, customs, rituals – they all give us roots; a sense of belonging and an identity. They can be fun too – provided they don’t rule our lives or weigh us down with a sense of societal obligation.

So, pull out those gorgeous saris and accessories, ladies. And have a haldi kumkum!

A group of women like you bringing to you articles that are thought around you and content you can trust.
Articles