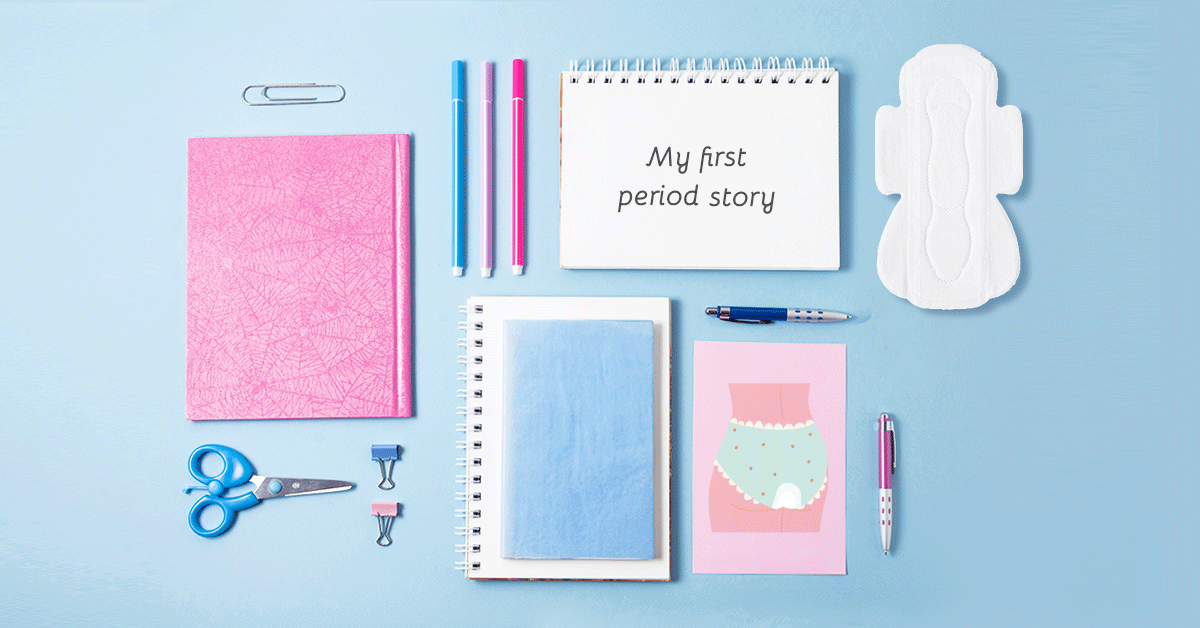 My First Period: An awkward story

I recall being 12 years old, enjoying a typical Sunday activity of waking up at 10 am and helping my mother and sister get breakfast ready for the family – back when the concept of brunch was not defined. In a very cliche scene, I managed to wait till the last second to go to the washroom, and that’s where I saw IT – my first period, which leads to my first period story.

I had started my first period with light spotting.

Having an older sister meant I knew a bit about what periods were but as she was 16 years old when she got hers, I thought I had a few years to catch up to my first period. After getting a pad and having an impromptu period talk, I went about my day. Not experiencing any discomfort besides the foreign feeling of having material inside my underwear; it was the next day when things got on the wrong foot.

Being a part of an all-girls school made the experience a bit easy. Even though I was one of the first in my group of friends to menstruate, I knew two others who had begun the first period journey before I had. As the day progressed, so did the discomfort. After what seemed like a lifetime, I finally reached home only to have a 20-minute break before I went to my daily study group with a tuition teacher.

I told my mother how I was experiencing pain, which I learned was called cramps, and wanted to stay home. However, like any Indian parent close to a child’s final exam time, she didn’t want me to skip class.

She said periods happen every month and that I should ease the pain with a hot water bag. Little did I know that while my cramps were being managed, my mother – with good intentions – informed my tuition teacher that I would be a bit late because I had my first period and had cramps.

30 minutes later, I stepped into my teacher’s house with 6 other girls and their books just to be looked at with complete shock. I knew most of them would be wondering, ‘How can she come in late and not be given a scolding?’. But after what happened next, I wish I had gotten a scolding instead.

I sat at my designated spot and started removing my essentials to study when I heard her say those 5 words in the most neutral tone, ‘Congratulations on becoming a woman’.

I never considered myself to be a woman before that but I definitely didn’t feel like one after it was said! There was a moment of pin-drop silence after which, as predicted when young pre-teens are involved, chaos ensued in the form of a million questions.

“What does that mean?”

“Did something special happen?”

And finally my favourite one of them all:

After being saved by the youngest girl in the group, the question still lingered around my big entrance into womanhood via the first period. After we were told to pack up and go home, I was able to confide in a few about my period and immediately was reminded of how normal it is, no matter what age you get it.

Over the years, getting your first period story still stands as the mark of entry into womanhood, and with time, even our struggles for the right sanitary products have been solved. Thin and soft pads that don’t lead to those awful rashes we unfortunately made our peace with were made, leaving days of discomfort behind. So now, when you’re talking to someone about their first period, it’s most likely to be more comfortable than mine. Well that’s the hope, anyway!

Ayesha is a writer at Nua. A self-proclaimed ambivert, she loves reading with a cup of coffee in one hand and caressing her foster animals with the other.
Articles